This is a short film we made with Emma Harper SNP Member of the Scottish Parliament for South Scotland, and Alex Lumsden, Level 5, White Water Coach with Dumfries and Galloway Council.

It follows their journey by canoe through some beautiful areas of Dumfries and Galloway, from St John’s Town of Dalry to Castle Douglas.

Emma is a complete canoeing beginner, but placed her trust in Alex. This film shows the new trail they both want to promote, and you only have to look at her face to see how much she enjoyed it.

The Flagey building, Place Flagey and the nearby lake are worth a visit.

Place Flagey itself is a big irregular, informal, open public space. Many roads meet here. On two sides are apartment blocks with shops at ground level.

The apartments are carefully composed facades of yellow brick, as is the Flagey building itself. The south west corner of the square touches the northern tip of the lake. The square has an intermittent spouting fountain area which locals braved with nonchalance. Trees are scattered round the edge, and there are two more modern public sculptures which which challenge the ’30s atmosphere.
On our visit a truck and PSVs were scattered across the square. This casualness hides a vigorous and contested re-development made between 2002 and 2008.

Place Flagey is situated south of central Brussels and at the top end of a little lake, about 15 minutes bus ride from the city centre. You arrive at a big glass-covered bus and tram stop situated to one side at the north end of the square.

We visited on a warm sunny morning, and had the immediate feeling of being in a good place. Why is that? It’s harder to define, we were enjoying the sun after a rainy day (it rains on average 200 days a year in Brussels).
That was one thing but we were also feeling relaxed. We had planned our route, and how it might fit in to the rest of our day. We had done some checking out on- line. We thought it looked interesting, that there might be quite a lot to see, but we weren’t sure as it seemed quite low-key. We had seen the lake on the map and thought we might enjoy walking round it to see the Cascade apartments on the other side. It seems to float above the lake like some medieval castle, yet at the same time, indisputably modern Art Deco.

But when we got there, we realised that we weren’t just looking at the Flagey building, were were experiencing a living built environment- square, buildings and lake. Each part revealed something of the rest, and that invited movement through the space. In general it also offered a small glimpse into ordinary suburban life in Brussels. It hadn’t been primped for the tourists. Flaws and untidiness were allowed exist alongside things which were beautiful and interesting.

To begin with, we walked round the lake. We could see glimpses of buildings with mixed styles on the other side. Towards the far end, there was a man-made rocky grotto in the shade of trees, complete with broken classical columns.
The Cascade apartment building is a strong draw. We noticed couples from other countries drifting by, taking photos and smiling, happy to be there. 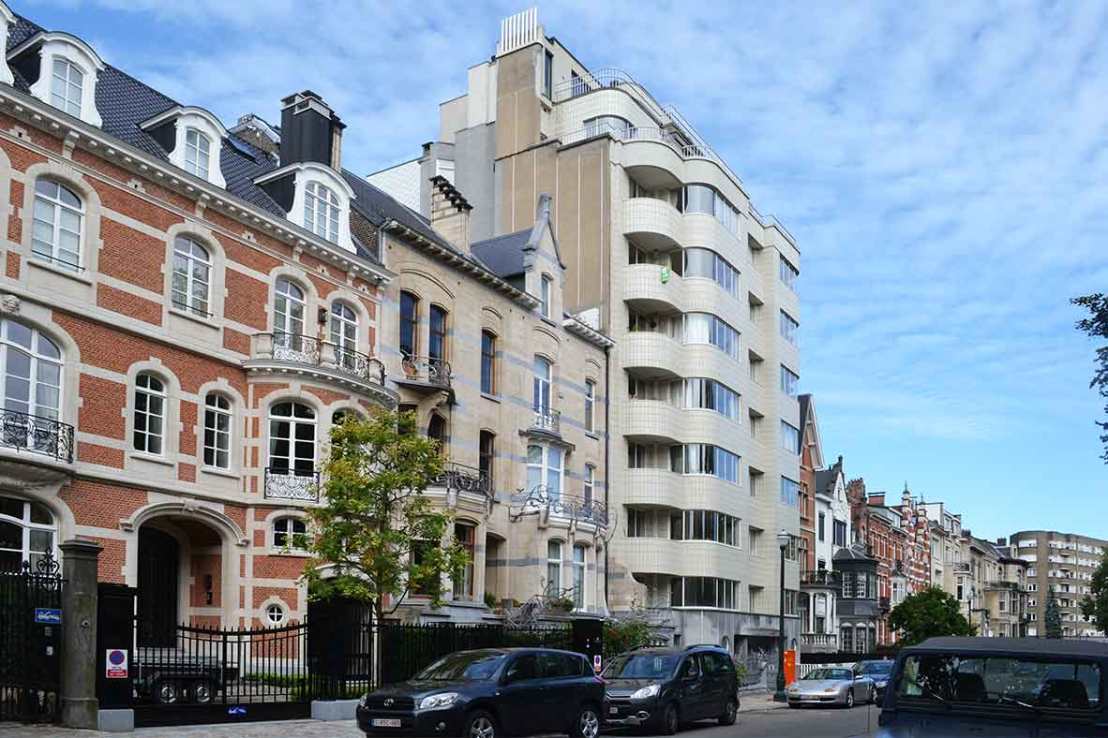 It is a large and beautiful example of Art Deco. Curving volumes, nice surfaces and simple detailing make a good mix. 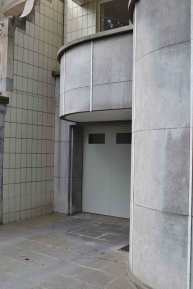 But there were other interesting buildings, an apartment block and a modernist house to discover as well.
The lake appeared well cared for, with several duck houses spaced out along its length.
At the top end, swans, geese and ducks queued for breadcrumbs from local children. This activity served as a link with the public space and re-entry to the square.

In this complex space, life continued. People moved back and forth across it. Trams and buses came and went. Delivery vans blocked shop fronts. A man unloaded a trolley load of goods into a shop. A cafe couldn’t serve coffee because their machine had broken! A shop was being re-fitted.

There was even an external elevator moving furniture into an apartment building, and passers-by watching the little drama. All this in the morning sunshine while we looked and lingered.

The Flagey building, formerly the I.N.R. (Institut National de Radiodiffusion), the name previously given to Belgian radio and television, is now subdivided and re-purposed. It is not particularly beautiful, but it is striking. It’s probably the reason visitors would initially go there. Unlike a monument or museum, it has limited public access at specific times. Perhaps it’s in transition, and sometime in the future will become just another restored museum, but for now it’s still a collection of working spaces. At the time of our visit, the only part we could find our way into was the cafe on the north-west corner.

Its has a genuine ’30s interior, much used and worn but very real. It’s also a popular, busy space. We liked the cafe tables,

the ceiling fans and lights, the little tubular wall lights. There was a nice bar area as well.

The bar staff were all young men, apart from a girl at the counter which served food. The whole atmosphere was easy, relaxed and in no way challenging. As outsiders we felt completely unnoticed, we just blended in.

That’s what was nice about it all, the way it was. It has the charm of the old, and the everyday. Explained by the small comfortable changes which we see as we pass through it.